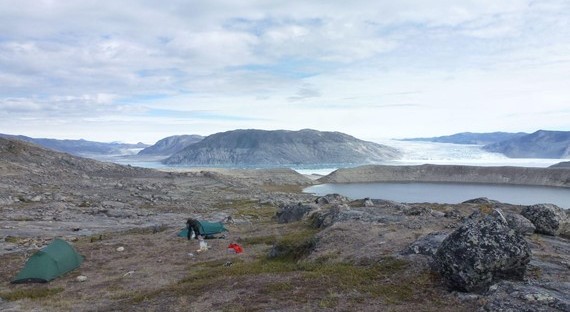 Boulder, Colo., USA: The Greenland Ice Sheet is the second largest ice body in the world, and it has the potential to contribute significantly to global sea-level rise in a warming global climate. Understanding the long-term record of the Greenland Ice Sheet, including both records of glacial advance and retreat, is critical in validating approaches that model future ice-sheet scenarios. However, this reconstruction can be extremely challenging. A new study published yesterday in the journal Geology reconstructed the advance of one of the largest tidewater glaciers in Greenland to provide a better understanding of long-term glacial dynamics.

“In the news, we’re very used to hearing about glacial retreat, and that’s because in a warming climate scenario—which is what we’re in at the moment—we generally document ice masses retreating. However, we also want to understand how glaciers react if there is a climate cooling and subsequent advance. To do this, we need to reconstruct glacier geometry from the past,” said Danni Pearce, co-lead author of the study.

An interdisciplinary team of researchers studied the advance of Kangiata Nunaata Sermia (KNS)—the largest tidewater glacier in southwest Greenland—during a period of cooling when the Norse had settlements in Greenland. Differing from glaciers that are strictly on land, tidewater glaciers extend and flow all the way to the ocean or a sea, where they can then calve and break up into icebergs.

Reconstructing the advance of glaciers can be exceptionally difficult, because the glacier typically destroys or reworks everything in its path as it advances forward. The research team undertook multiple field seasons in Greenland, traveling on foot to remote sites—many of which hadn’t been visited since the 1930s—to try and uncover the record of KNS advance.

“When we went out into the field, we had absolutely no idea whether the evidence would be there or not, so I was incredibly nervous. Though we did a huge amount of planning beforehand, until you go out into the field you don’t know what you’re going to find,” said James Lea, the other co-lead author of the study.

By traveling on foot, the research team was able to more closely examine and explore sites that otherwise may have been missed if traveling by helicopter. The team’s planning paid off, and the sedimentary sequences they studied and sampled held the clues they were looking for to date and track the advance of the glacier.

The research team found that during the twelfth and thirteenth centuries CE, KNS advanced at least 15 km, at a rate of ~115 m/yr. This rate of advance is comparable to modern rates of glacial retreat observed over the past ~200 years, indicating that when climate is cooler glaciers can advance equally as fast as they are currently retreating. The glacier reached its maximum extent by 1761 CE during the Little Ice Age, culminating in a total advance of ~20 km. Since then, KNS has retreated ~23 km to its present position.

The period when the glacier was advancing coincided with when the Norse were present in Greenland. Prior to its maximum extent during the Little Ice Age, the researchers found that KNS advanced to a location within only 5 km of a Norse farmstead.

“Even though KNS was rapidly coming down the fjord, it did not seem to affect the Norse, which we found really unusual,” said Pearce. “So the team started to think about the surrounding environment and the amount of iceberg production in the fjord during that time. At the moment, the fjord is completely filled with icebergs, making boat access challenging, and we know from historical record that it has been like this for the last 200 years while the glacier has been retreating. However, for KNS to advance at 115 m/yr, it needed to hang onto its ice and could not have been producing a lot of icebergs. So we actually think that the fjord would have looked very different with few icebergs, which allowed the Norse far more easy access to this site for farming, hunting, and fishing.”

In the 1930s, archaeologists who visited the site hypothesized that conditions in the fjord must have been different from the present day in order for the Norse to have occupied the site, and this current research study provides data to support these long-held ideas.

“So we have this counterintuitive notion that climate cooling and glacier advance might have actually helped the Norse in this specific circumstance and allowed them to navigate more of the fjord more easily,” said Lea.

The Norse left Greenland during the fifteenth century CE, and these results are consistent with the idea that a cooling climate was likely not the cause of their exodus; rather, a combination of economic factors likely led the Norse to abandon Greenland.

The results from this research reconstructing rapid glacial advance are also shown to be consistent with the ways ice sheet models work, which brings confidence to the projections from these models. Having accurate models and projections are crucial in understanding and preparing for future scenarios of continued retreat of the Greenland Ice Sheet and associated sea-level rise.

“Melt from Greenland not only impacts sea-level change but also the ecology around the ice sheets, fisheries, the biological productivity of the oceans—how much algae is growing. And also because the types of glaciers we’re looking at produce icebergs these can cause hazards to shipping and trade, especially if the Northwest Passage opens up as it is expected to,” said James Lea.

Pearce added, “Our research shows that climate cooling can change iceberg calving behavior and drive glacier advance at rates just as rapid as current retreat. It also shows how resilient the Greenlandic Norse were to the changing environmental conditions. Such adaptation can give us hope for the changes we may face over the coming century.’’

GEOLOGY articles are online at https://geology.geoscienceworld.org/content/early/recent . Representatives of the media may obtain complimentary articles by contacting Kea Giles at the e-mail address above. Please discuss articles of interest with the authors before publishing stories on their work, and please make reference to GEOLOGY in articles published. Non-media requests for articles may be directed to GSA Sales and Service, gsaservice@geosociety.org.