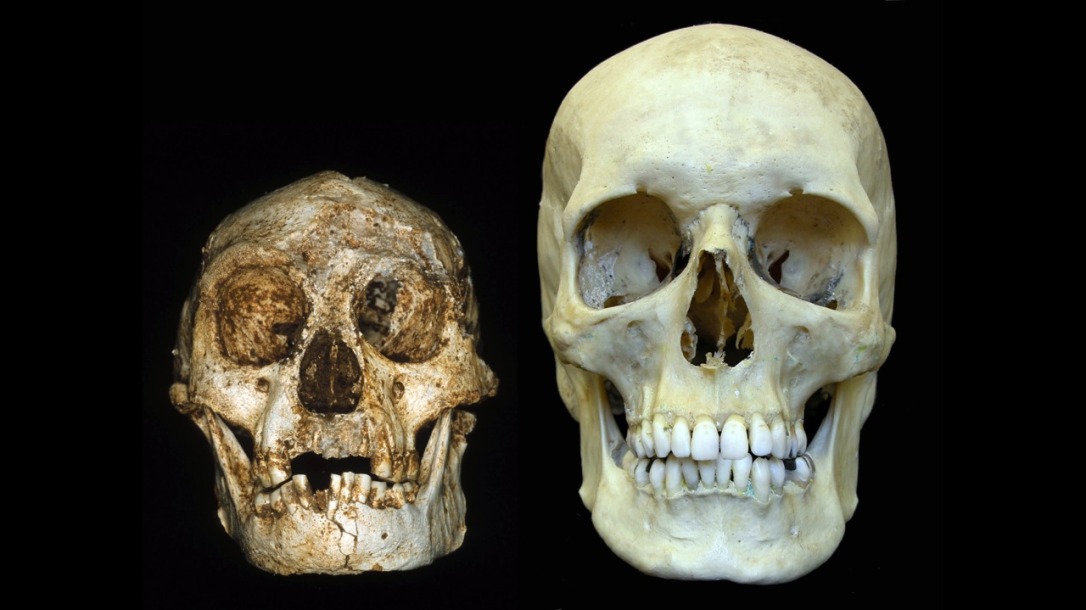 Hobbits are no longer just fictional residents of Middle-earth, they were real-life inhabitants of Flores, Indonesia. This species of extinct hominin, Homo floresiensis, was first discovered at the cave site of Liang Bua on the island of Flores in 2003-2004. They received their nickname of “the hobbits” due to their small size. The occupation of the Liang Bua cave was recently re-dated to 100-60 ka, indicating that H. floresiensis likely went extinct 50,000 years ago. Thus, H. floresiensis was among the last hominin species to die out.

Skeleton of LB1, the holotype of the species. Image: William Jungers

H. floresiensis rightfully earn their “hobbit” nickname from their remarkably short stature and comparatively large feet. Individuals only measured around 3.5 ft tall (or 106 cm). Their brain cases were only ~400 cc, vastly smaller than modern human endocranial volumes of ~1200 cc. (The header image shows a H. floresiensis skull compared to that of a modern human.) Quite interestingly, H. floresiensis have very short lower limbs but long feet. These features are more similar to earlier hominins like Australopithecus afarensis than they are to modern humans.

Length of foot of H. floresiensis compared to its tibia. Image: William Jungers

Given the fact that H. floresiensis temporally overlaps with other hominin species in Asia, like H. erectus, and the dispersal of H. sapiens out of Africa, it has been contested whether H. floresiensis is truly a separate species of hominin. Certain hypotheses posit that H. floresiensis could merely be a human pygmy, as there are groups of modern peoples who show comparatively diminutive statures. Alternatively, they could be dwarfs that had a pathological condition like microcephaly, which causes smaller brain sizes. However, the most likely explanation is that they truly are a new species of hominin that resulted from island dwarfing due to geographical isolation.

The island of Flores has only rarely been connected to the Asian continent via land bridges. This longstanding separation limited the dispersal of animals and resources between islands and the mainland. On islands, mammals tend to have a reduced body size to improve energetic efficiency due to these resource limitations. Because islands can also be low in predators and competitors, you can have a reduced size without increased risk. Thus, H. floresiensis is likely a late-surviving species of early Homo that evolved in geographical isolation to a diminutive size.